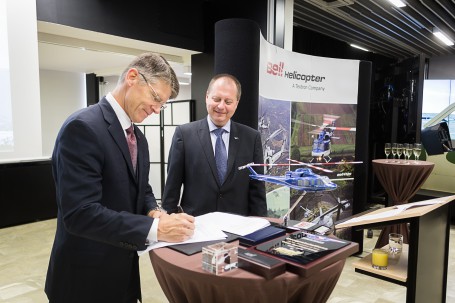 “We are looking forward to working closely with Bell Helicopter,” said Roman Planička, LOM PRAHA general director. “During the past 100 years, LOM PRAHA has been the leading European company providing military aircraft lifecycle support in NATO and Europe, and we share Bell Helicopter’s vision for the path ahead for the Czech Republic.”

“This is a key relationship for Bell Helicopter,” said John Garrison, Bell Helicopter president and CEO. “LOM PRAHA will deliver a wealth of customer knowledge and technical experience in Central and Eastern Europe to our H-1 operators in the region. Today’s signing reinforces our commitment to the Czech Republic and is another step towards increasing Bell Helicopter’s level of participation in the Czech aerospace industry. It’s a great advantage for our customers that we are now collaborating with one of the premiere Aerospace service provider in the world.”

Bell Helicopter currently owns and operates a European customization, completion and delivery center on the grounds of Vaclav Havel Airport, established to answer the heightened demand for Bell Helicopter’s civil products and services in Europe.