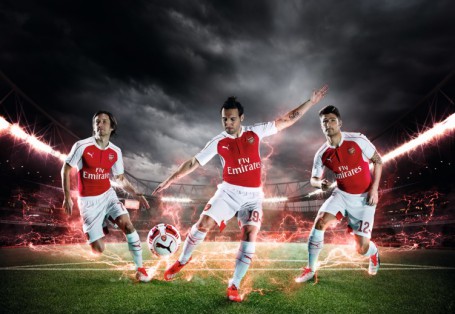 London, United Kingdom (25 June, 2015) – The new 2015/16 Arsenal home kit goes on sale today both online and in stores around the world. Featuring Arsenal’s traditional home colours applied with a modern approach to materials and a formal silhouette, this new playing kit will be seen on pitch for the first time in July during pre-season.

The new Arsenal home shirt features a grandad collar and gold piping trim around the collar edge, the colour staying true to The Gunners’ classic red and white strip that first appeared in 1933. The main body is red to represent the tradition of the Gunners through the years, with bold jacquard stripes running horizontally. The white sleeves feature PUMA’s classic Form Strip, elegantly highlighted with red piping and combined with mesh inserts for breathability.

Santi Cazorla, Arsenal’s midfield maestro and PUMA player said: “The new kit has a traditional, classic look which is important to Arsenal. I like the way PUMA has embraced our traditional colours with a striking design and materials that really improve comfort and performance. I know the fans are going to be really happy with this new kit and I’m looking forward to pre-season when we can wear it out on the pitch.”

This season, PUMA has put the fans at the heart of the 2015/16 Arsenal campaign, Powered By Fans represents the importance of Arsenal’s fans to the club and players in helping motivate and energise their performance on the pitch. The Powered By Fans film starring Olivier Giroud, Santi Cazorla, Héctor Bellerín, Nacho Monreal and other first team players is available to embed via the following YouTube link:

The home replica kit and full collection of fan wear is available in-store from today. For more information, go to www.puma.com/arsenal