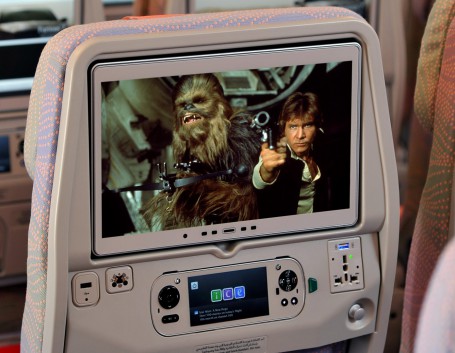 DUBAI, U.A.E., 14 December 2015 –Emirates customers will be able to enjoy the first six Star Wars movies in one epic journey from January. For the first time, these films will be available on Emirates’ award-winning inflight entertainment system, ice.

“We always aim to offer our passengers the best content on board and are delighted to bring the first six Star Wars movies to our screens. With a total run time of over 13 hours, customers could watch all six films at one go on some of our long haul flights. It will allow Star Wars enthusiasts to re-watch the classic films and gives others a chance to see why these movies have such a huge fan base worldwide,” said Patrick Brannelly, Emirates’ Divisional Vice President – Customer Experience.

The Star Wars feature is in addition to over 2,000 channels of on-demand entertainment available on ice Digital Widescreen including over 500 movies in January 2016.

The seventh and soon to be released installment, Star Wars: The Force Awakens will be available on Emirates in early 2016.