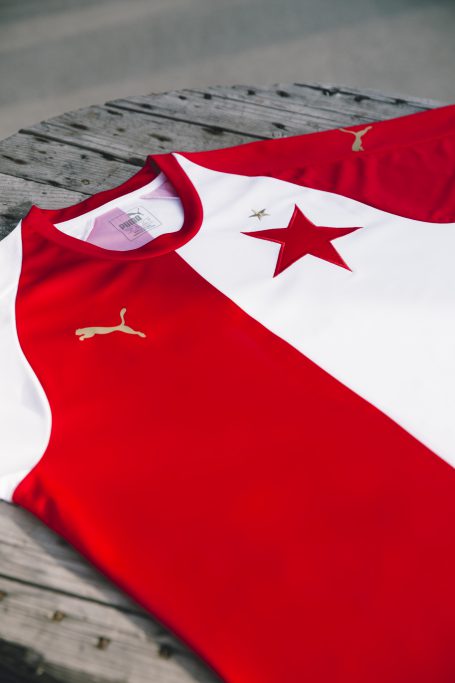 Global sports brand PUMA and SK Slavia Praha, the oldest Czech football club, resumed a successful collaboration from the 70s and 80s. Together they have designed new jerseys for the players. The new away jerseys will be worn for the first time on 7th March 2019 in a match against Sevilla FC. Slavia is the only Czech club than has entered this phase of the European League.

SK Slavia Praha, founded in 1892, is the oldest football club in the Czech Republic. Slavia has won 18 league titles, the latest during the 2016/17 season. Many top footballers have played in their famous red and white jerseys and gone on to become representatives, players in prestigious foreign competitions or later renowned coaches. For home matches SK Slavia will keep the traditional red and white jerseys but the new jerseys will have a gold PUMA logo emblazoned on the red part of the shirt and on the neck an inscription reading Slavia. White shirts will have the classic PUMA form stripe in red. The sports set is completed with blue football socks. The Slavia players will wear their new home match jerseys for the first time on 10th March in a match against the Czech team FC Baník Ostrava.

The combination of red and white has a historical meaning for the club. White symbolises an honest fight and clean sportsmanship. Red symbolizes the passion and heart that they pour into every match. The red downwards facing five-pointed star represents hope even in bad times. The stitched jersey is a harmony of these values.

“We are very pleased that such a historical football club has decided to collaborate with PUMA for their new jerseys. We wish the team a lot of luck in the league and in the European Cup,” said Jan Sochor, CEO of PUMA for Eastern Europe.

The cooperation with PUMA and the new sports set is exciting news for the players themselves. “The new jerseys are beautiful and great quality. We are happy that the new jerseys stick to the Slavia tradition, but they also feel modern with sophisticated technology,” said Slavia player Jaroslav Zmrhal. The Jerseys for the away games are different. The Slavia players will wear an all-black sports set -made from tight evoKNIT material and technology dryCELL – for the first time in a match against Sevilla FC on 7th March 2019. PUMA uses this material for the jerseys of other national teams, including Czech.

The unveiling of the new jerseys will be accompanied by a promo video representing the collaboration of the club and PUMA and all that they stand for. The main stars of the creative clip are PUMA Slavia football players such as Jan Bořil, Jaromír Zmrhal and the goalkeeper of the women’s team Bára Votíková. Video: https://youtu.be/RR1ZqnNl

The new jerseys will be available in the fanshop and at the SPORTISIMO sports chain, which since the beginning of this year is Slavia´s official partner.