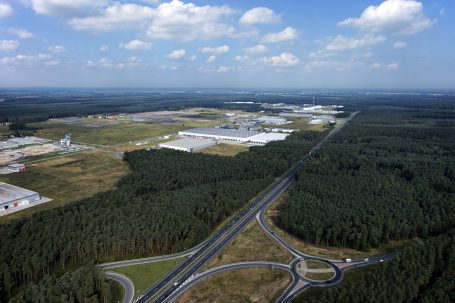 Prologis, Inc., the global leader in logistics real estate, today announced it has started construction of a speculative facility totalling 9,200 square metres at Prologis Park Szczecin. The building is 60 percent pre-let to an international furniture company, which will occupy a total of 19,600 square metres in the park, including space in the new development. The building is scheduled for completion in the first quarter of 2017.

“The new building will have an increased number of docks and a reversed column grid, and will be adapted for distribution operations. At our customer’s request, we installed an additional weighbridge at the docks for loading and unloading control,” said Ewa Zawadzka, vice president, head of land and development, Prologis Poland. “

“Customers have appreciated the advantages of this park, which resulted in high demand and enabled us to expand rapidly,” – added Zawadzka.

Prologis Park Szczecin is a state-of-the-art distribution park located at the Goleniów Industrial Park in the West Pomerania Province. The park currently comprises three buildings totalling 80,700 square metres. Located near the S3 Expressway, less than 70 kilometres from the Port of Świnoujście, 40 kilometres east of the German border, 35 kilometres northeast of Szczecin City Centre and seven kilometres southwest of the Goleniów Airport, it is a prime distribution hub for the west and Scandinavia.

With its active engagement in four CEE countries and a portfolio totalling 4.4 million square metres, Prologis is the leading proprietor and provider of distribution facilities in Central and Eastern Europe (as of 30 September 2016).