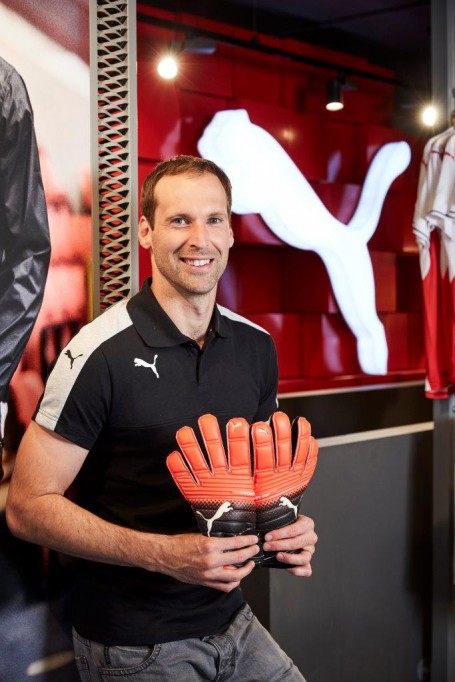 PUMA has signed an endorsement partnership with Petr Čech, the goalkeeper who has the record for most Premier League clean sheets.  The former Czech Republic international will become the lead PUMA goalkeeper in the English Premier League.

Petr Čech said, “I have got to know PUMA very well through their work with Arsenal over the past year and I like the people, their products and their marketing ideas.  They have created some excellent campaigns and events for Arsenal that as a player I’ve been very happy to be involved in.  For a goalkeeper it’s also very important to have a glove you totally trust, which I do with the evoPOWER . I’m pleased to be working with PUMA more directly.”

Johan Adamsson, Global Director of Sports Marketing at PUMA added, “Petr Čech is a consummate professional – a goalkeeper who works hard to maintain the commanding form that results in him being admired the world over.  He is also a much liked personality in football, a gentleman of his sport.  Petr will be a great ambassador for our brand and our products, and we’re delighted he’s joined us.”

Petr Čech has won the UEFA Champions League, four English Premier League titles, four FA Cup’s, three FA Community Shield’s, three Football League Cup’s and the UEFA Europa League.  He helped the Czech Republic get to the semi-finals of Euro ’04 in Portugal.  Čech has won the Premier League golden glove award four times, has been in the PFA team of the year twice, has been awarded the Czech player of the year a total of eight times and has won the Czech Republic Golden Ball a record eight times.  He also holds the record for the most clean sheets ever in the history of the Premier League.