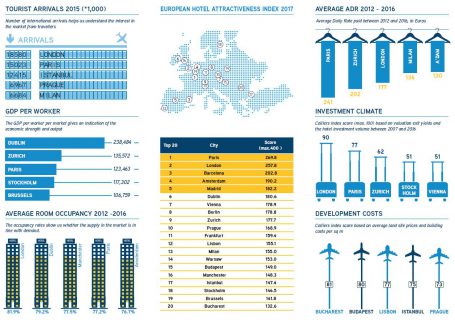 Paris claimed top spot in Colliers International’s Hotel Investment Attractiveness Index, an analysis of the investment climate of 20 European cities, despite predictions that investors and tourists would lose faith in the city due to political uncertainty and the perceived threat following various national security breaches. Prague was ranked in 10th place in the index, boosted by the low level of development costs and high number of tourist arrivals.

Paris’ lead ranking was down to its high demand growth, strong hotel performance, high investment returns and market depth from 2012-2016. Prague scored highly on two metric components: it ranked 4th out of 20 cities on the tourist arrivals component with 6.97 million international visitors in 2015, and in 5th place for development costs based on average land site prices and building costs per square metre.

Dirk Bakker, Head of EMEA Hotels, Colliers International, said: “Investors are regularly requiring the latest information on cities where they will receive high returns, which in a politically and economically uncertain world is often difficult to predict. Our index provides us with something more than anecdotal evidence through which to advise our clients.”

Other highlights of the report include: