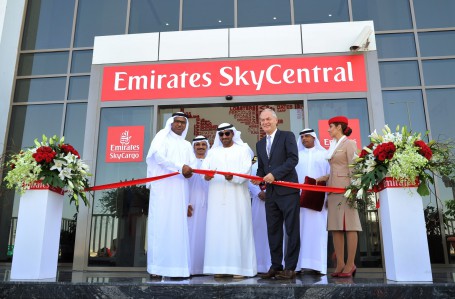 Named Emirates SkyCentral, the cargo facility is the home of Emirates SkyCargo’s fleet of 15 freighter aircraft, and was officially opened on the side lines of the Dubai Air Show. The event was attended by a number of dignitaries, including members of Dubai’s Executive Council, representatives from various local authorities, members of Emirates’ senior management, as well as local and international media.

“The opening of Emirates SkyCentral is an important milestone for us, as it represents our vision for future growth and firmly establishes Emirates SkyCargo as the world’s leading air cargo carrier across all its operational areas. The space it currently occupies on the land allocated to us at Dubai South is part of a much bigger area, which we can develop over time to increase our cargo handling capacity to achieve our vision of 12 million tonnes annually by 2050, from the current 2.3 million tonnes,” said Nabil Sultan, Emirates Divisional Senior Vice President, Cargo.

“This facility also features the best and latest of what the air cargo industry has to offer, and enables us to give our customers a world class, efficient and seamless service no matter what their requirements. It also further establishes Dubai as a leading global air cargo hub, which has the advantage of a strategic location in the centre of trade between East and West. It takes a lot of work to bring a facility such as this to reality, and I want to thank everyone for their support and commitment in making it happen, from the Government of Dubai and its various departments, to the contractors and staff of Emirates SkyCargo,” he added.

Mohsen Ahmed, Vice President of Logistics at Dubai South, said: “With the launch of the Emirates SkyCargo facility, Dubai South begins an exciting new chapter in its journey towards establishing Dubai’s excellence as a logistics hub. Dubai South offers the ideal connection point for sea and air cargo, which calls for rapid movement to the markets of the Middle East, Asia and Africa.”

Emirates SkyCentral is located 77 kilometres from Dubai International Airport (DXB) – a convenient location with factories and forwarders in the surrounding areas, and in close proximity to a dedicated corridor to the Jebel Ali Port and Free Zone.

With Emirates SkyCargo’s dual operation of belly hold cargo being managed at its Cargo Mega Terminal at Dubai International and freighter cargo at DWC, cargo is moved 24/7 by truck between the two airports via a bonded virtual corridor. Since Emirates SkyCentral first became operational in May 2014, the movement of cargo between the two airports has become a seamless process and is now firmly integrated into its operations, with a transit time of just five hours between the arrival of goods to their departure from freighter to belly hold and vice versa.

Emirates SkyCargo has 47 trucks that ply the virtual corridor between the two airports, with each truck being equipped with satellite tracking to ensure the safety and security of cargo and staff.

Guests and media attending the official opening event were taken on tour of the facility and were shown the various features and unique aspects of the terminal, from the state of the art centralised screening and integrated police facility, to the cool chain areas that occupy 15,000 square metres and offers dedicated storage areas for goods requiring varying temperature ranges, to the fully automated material handling and Quick Dolly Transfer Systems that enables quick transfer of 6 Unit Load Devices (ULDs) simultaneously.

Emirates SkyCentral is a dedicated freighter facility, and with 12 aircraft stands directly in front of the terminal, one of its key features is the close proximity of aircraft to the receiving docks, which enables quick movement of goods. The freighters that operate from Emirates SkyCentral fly to more than 50 destinations around the world.

Emirates SkyCargo is the freight division of Emirates Airline and is the world largest international air cargo carrier. Renowned for the highest standards of product quality in supporting business logistics – achieving customer satisfaction through innovation, flexibility and the constant refinement of service levels.

In the 2014-15 financial year, Emirates SkyCargo reported a revenue of AED 12.3 billion (US$ 3.4 billion), a remarkable 9% increase over the previous year. Contributing 15% of the airline’s total transport revenue Emirates SkyCargo continues to play an integral role in the company’s expanding operations.

Emirates SkyCargo currently uses cargo hold capacity in Emirates’ fleet of more than 240 aircraft, including 15 freighters – 13 Boeing 777-Fs and two B747-400ERFs – and provides air cargo services to more than 145 destinations around the world.

Reflecting Emirates’ overall policy of excellence in every area of operation, Emirates SkyCargo has become a significant force in the global air cargo industry. This has been made possible by highly-qualified staff, the very latest information technology, the most efficient aircraft for its expanding route network and the finest ground handling facilities and equipment.

Excellence is the watchword and Emirates SkyCargo’s efforts have been recognised throughout the industry at awards ceremonies throughout the world from the UK to Canada, Shanghai to the UAE.

Dubai South – the rebranded Dubai World Central – is an emerging 145 sq. km. city situated within the emirate of Dubai that will ultimately sustain a population of one million. Launched as a Government of Dubai project in 2006, the city is mandated to embody the vision of His Highness Sheikh Mohammed Bin Rashid Al Maktoum by manifesting the urban and societal themes as outlined in the Dubai Plan 2021.

These themes relate to becoming a city of happy, creative and empowered people, an inclusive and cohesive society; the preferred place to live, work and invest, a smart and sustainable city, and a pivotal hub in the Dubai South’s economic platform supports every conceivable kind of business and industry. The city is also home to the now-operational Al Maktoum International Airport –the largest airport in the world when complete – and the World Expo 2020.