Emirates A380 draws in over 18,000 visitors at the Dubai Airshow 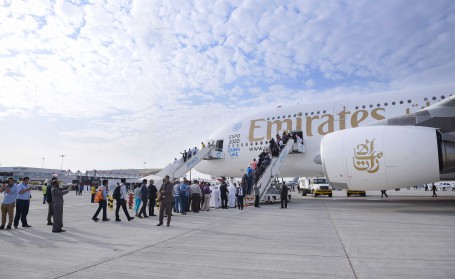 DUBAI, UAE, 18th November 2015: Over 18,000 people visited the new two-class Emirates A380 over the last five days at the Dubai Airshow. That is the equivalent of filling up 30 full flights on the two-class A380, which debuted for the first time at the show.

The aircraft on display was Emirates’ 68th A380 and was ferried from Hamburg to the show site, allowing Dubai Airshow visitors a first glimpse on-board the brand new double-decker. The aircraft will begin flying to Copenhagen on 1 December. It will also fly to Bangkok.

The Emirates’ two class configured A380 features 58 flatbed seats in Business Class and 120 Economy Class seats on the upper deck, with another 437 seats in Economy Class on the lower deck. The aircraft also features Emirates’ renowned Onboard Lounge. The newest version of Emirates’ A380 will feature among the widest individual in-seat Economy Class screens in the industry, measuring in at 13.3 inches, where passengers have the choice of over 2,000 channels.

Click here to watch a video showcasing Emirates highlights at the Dubai Airshow.

Emirates was the first airline to order the A380 and is the largest operator of this aircraft.  The A380 fleet has flown over 52,000 round trips and has travelled over 700 million kilometres. Over 47 million passengers have travelled on the aircraft to date.  The Emirates A380 currently flies it to 34 destinations around the world from Dubai. The airline currently has 68 A380s in service and has a further 72 on firm order.

At the 2015 Dubai Airshow, Emirates also displayed its smallest aircraft – an Embraer Phenom 100E and a Cirrus SR22, representing the fleet of 27 new aircraft which will be used by cadets at the new Emirates Flight Training Academy when it opens in 2016.  On the sidelines of the show, Emirates officially inaugurated Emirates SkyCentral, its state-of-the-art cargo terminal at the Logistics District in Dubai South, dedicated to the airline’s freighter operations.