Emirates SkyCargo wraps up 2017 on a positive note 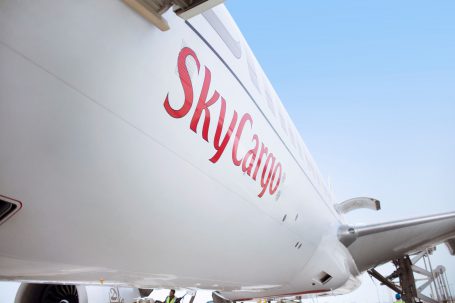 Emirates SkyCargo, the freight division of Emirates, completed a year of strong growth in 2017. The air cargo carrier’s robust performance, set against the backdrop of a resurgent global air cargo market, was underlined by the introduction of specialised customer focused air transportation solutions across a number of industry verticals and by continued investment in infrastructure.

In response to increasing demand from its customers, Emirates SkyCargo introduced a range of air transport solutions specific to industry verticals including Emirates Pharma, Emirates Wheels and Emirates Fresh.

Emirates Fresh has helped producers around the world transport fruits, vegetables, flowers and other perishables including fresh fish and meat. In 2017 Emirates SkyCargo transported over 285,000 tonnes of perishables across its network. In February Emirates SkyCargo unveiled a unique rose decal on one of its freighter aircraft to highlight the importance of air cargo to the floriculture industry.

With the introduction of Emirates Wheels, Emirates SkyCargo has been transporting close to 150 cars a month not only in the peak summer season, but throughout the year. In addition to individual customers, the air cargo carrier has worked with major car manufacturers and distributors to transport premium and luxury cars.

With its focus on structured and customised offerings, Emirates SkyCargo is well positioned to further address customer needs in 2018 in other sectors including e-commerce.

In the UAE, Emirates SkyCargo signed an MoU with Mohammed Bin Rashid Space Centre to become the space science centre’s preferred partner.  In the e-commerce segment, the air cargo carrier entered into an understanding with Dubai CommerCity to develop new solutions for the global e-commerce industry and to strengthen Dubai’s position as a global hub for e-commerce.

Emirates SkyCargo is committed to excellence in service delivery and this was acknowledged in a number of industry forums. Some of the awards that Emirates SkyCargo won this year included the ‘Best Cargo Airline Middle East’ award at the annual Cargo Airline of the Year 2017 awards organised in London by Air Cargo News; ‘Best Air Cargo Carrier- Middle East’ at the 2017 Asian Freight, Logistics and Supply Chain (AFLAS) Awards held in Singapore by Asia Cargo News; and the prestigious DHL Carrier Award for Reliability and Excellence (DHL CARE) for pharma in Singapore in June 2017.