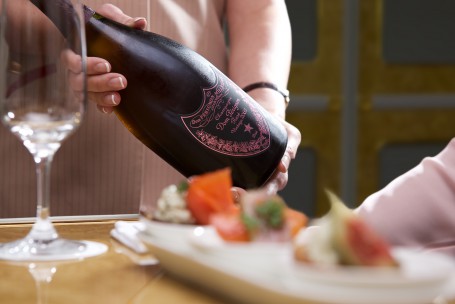 The largest global partner of Dom Pérignon, Emirates has also introduced a pairing menu developed by its team of culinary experts in collaboration with Pascal Tingaud, Chef de Cuisine at Dom Pérignon and two-Michelin star chef.

“Food and wine pairing has reached its tipping point, in that it is now an expected part of the fine dining experience. We have a likeminded partner in Dom Pérignon, who also strives to bring the dining experience to life and help elevate the rarity and richness of their product,” said Joost Heymeijer – Senior Vice President, Catering at Emirates. “We have worked hard to fine-tune a culinary match with the exclusive Dom Pérignon Vintage Rosé 2003, to make them come alive and reach their full potential when paired with food. We place great emphasis on creating an experience onboard that our customers will cherish, and hope this new offering will help meet the high standards they have come to expect from Emirates”.

“It is easy to have a strong partnership and to work with Emirates’ culinary team, because we have the same level of exigency in the details for the food pairing with Dom Pérignon as Emirates for the level of quality and satisfaction of their passengers,” said Pascal Tingaud, Chef de Cuisine at Dom Pérignon.

Dom Pérignon Vintage Rosé 2003 – The 2003 vintage was a real challenge for its creation due to extremes in weather conditions. After an unusually harsh, dry winter, severe frost devastated the grape crop. This was followed by the hottest summer in 53 years. The grapes that miraculously survived the frost and hail were then subject to scorching heat. However, the grapes harvested were mature and healthy, comparable to those of the legendary 1947, 1959 and 1976 harvests. The resulting intensity is unique and paradoxical, hovering between austerity and generosity.

Dom Pérignon Vintage 2005 – The year 2005 was full of contrasts. The weather was mostly warm, with little rain. A heatwave in August was followed by cool, rainy weather in September. Eventually, a drastic selection in the vineyard ensured a limited volume of exceptional quality, with a never-before-seen aromatic maturity. The wine has a strong character and a powerful presence. Overall, it is structured, focused, firm and dense. Its intriguingly spicy, flowery finish remains present in each sip.

“’I am drinking stars’, Dom Pierre Pérignon, the first creator of the Dom Pérignon’s Vintages, is supposed to have said. This is now a reality thanks to Emirates throughout the amazing experience they propose onboard,” said Richard Geoffroy, Cellar Master at Dom Pérignon

To find out more about the fine wines, ports and champagne that will be served on a specific flight, customers can visit emirates.com to view the wine lists, by simply keying in the flight details at: http://www.emirates.com/ae/english/flying/dining/wines/inflight-wine.aspx