Emirates celebrates a decade in the Czech Republic 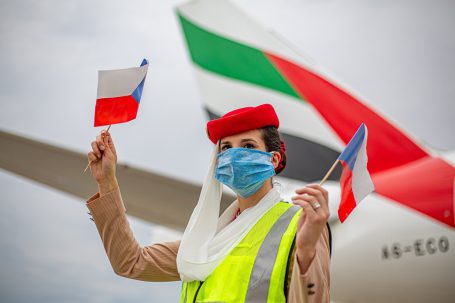 Emirates is celebrating its tenth anniversary in the Czech Republic. The airline launched flight operations to Prague in 2010, serving Czech customers with a direct flight to Dubai. Today, Emirates serves the route with three daily flights, utilising its wide-body Boeing 777-300ER aircraft, offering customers travel options to more than 80 destinations across six continents. Over the past decade, Emirates has operated more than 3,800 roundtrip flights between Prague and Dubai, carrying more than 2.4 million passengers to the Czech capital, from Prague to Dubai and onwards.

Bořivoj Trejbal, Czech Republic Country Manager for Emirates, said: “Emirates’ tenth anniversary to Prague is a very special milestone for us. We thank our team for their hard work and dedication over the past decade, our industry partners and our Czech customers for making the last ten years a remarkable journey. We remain committed to serving the country and look forward to continue flying our Czech customers better than ever – offering world-class travel experiences to Dubai and beyond.”

The airline continues to play a vital role in stimulating the country’s growth in business, trade and tourism by providing connectivity to the Far East, Australasia, West Asia, Indian Ocean and Middle East via Dubai. Since 2010, Emirates SkyCargo has carried more than 94,000 tonnes to and from Czech Republic, including the main commodities of fruits and vegetables, electronics, automotive spare parts and cosmetics.

Emirates currently connects Prague to 85 destinations via Dubai, including popular destinations visited by Czech customers such as Seychelles and Maldives.

Emirates Skywards – the loyalty programme of Emirates and flydubai – offers members special privileges including flight rewards.  More than 110,000 Czech nationals and residents are enrolled in the programme –benefitting from rewards on flights, hotel stays as well as retail and lifestyle experiences supported by the airline.

Emirates is one of the world’s largest international airlines with a global footprint across six continents. The airline operates one of the most modern and efficient aircraft fleet comprised of Airbus A380 and Boeing 777 aircraft – connecting passengers and facilitating global trade to and through its modern hub, Dubai. Since its inception, the airline has been recognised by more than 500 international awards for operational excellence, innovative services and industry leading products – making Emirates one of the world’s most recognized airline brands.