Over 60% of parents from Central Bohemia, Prague and Brno wish their children at primary school had a bilingual education, but only 10% of kids attend bilingual schools 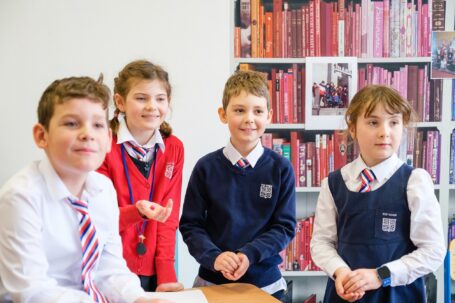 Czech-British Tip Toes schools, operating primary schools in Central Bohemia and Prague, present results from its latest research on educational trends among parents with at least one child at a primary school in Prague, Central Bohemia or South Moravia1. The research examines the importance of second language knowledge and an individual teaching approach, as well as the role of a native speaker within the foreign language learning process. What is the main priority for Czech parents in terms of their children’s education? A clear majority – 75% of parents – stated that quality teachers with a positive approach is the main aspect they wish for their children.

“Bilingualism is a growing trend in the Czech Republic, as the country becomes more multicultural and the number of foreigners living and working in the Czech Republic increases year by year, meaning more “mixed” couples, families and working environments. It is estimated that around 60% of the global population is bilingual or multilingual,” explained Jarmila Baker, one of the founders of Tip Toes Schools.

Over 60% of parents from Prague, Brno and Central Bohemia wish their children had a bilingual education, but only 10% of kids actually attend a bilingual school, mainly those in Prague with parents of a higher age (45 – 53 years). Among the main reasons for parents not choosing a bilingual education are financial reasons (25 %), more often the case for parents living in Prague, as well as logistical issues (21%), often among parents living in Brno, and other reasons such as disagreement within the family (5%).  On the other hand, 37% of parents confirmed that they don’t see bilingual education for their children as a priority, with the option of learning a second language at their current school seen as sufficient. This view was more common among women than men, suggesting fathers are slightly more supportive of a bilingual option.

Asked about the main benefits of a bilingual education for children, almost 54% of Czech parents replied that it brings better future prospects, especially in education, employment, working/studying abroad, and orientation within global affairs, a factor highlighted especially by the younger generation of parents and more often by mothers (59%) than fathers. 29% of parents see the main benefit as perfect fluency in a second language, while 11% cite better overall development, and 3% believe the main benefit to be cultural and social enrichment.

“There’s something truly special about seeing children developing and growing in more than one language. You know that as their ability in Czech and English grows day-by-day, their future work and education prospects become brighter, a factor which was also confirmed by our latest research,” said Jarmila Baker. “The demand for a bilingual education and an individual teaching approach among Czech parents in the biggest cities is growing, which is a reason for our decision to open a new primary school in Vinohrady this autumn.”

An individual teaching approach that tailors instruction to all students’ learning needs is desired by 82% of Czech parents, but such an approach is a reality for only 12% of children at primary schools. 41% of parents stated that they wish their children enjoyed such an individual approach, but their current school doesn’t offer it due to the high number of pupils in one class. This reply was more common in Prague than in Brno. 17% of correspondents stated that their child’s current school doesn’t believe such an approach is necessary. In total, 17.5 % of parents don’t require an individual approach at all.

Quality teachers with a positive approach are clear winners (75%) for parents, with a higher share of mothers requiring this option when evaluating the main priorities within an educational process for their children.  9% of parents say their main priority is an individual teaching approach, followed by the presence of native speakers for foreign language lessons, foreign language lessons as such, good school facilities and equipment, and the creation of interesting and entertaining content for teaching individual subjects.

1) Research was conducted on a representative sample of parents from the Prague, Central Bohemian and South Moravian regions with at least one child at primary school, through the Instant Research application by the Ipsos agency.