Crisp or soft, sweet or dry: Become a wine connoisseur with Emirates 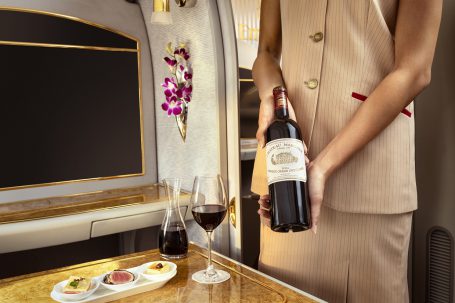 Learning a new language, becoming a master chef or practicing Yoga: While travel plans are on hold all around the world, globetrotters are looking for new pastimes. For those out of ideas, Emirates presents yet another option: becoming a wine expert. The airline serves some of the finest wines in the world and Emirates’ very own wine specialist shares guided tutorials on some of the most exquisite wines served on board.

The Emirates Wine ChannelEmirates Wine Channel from its inflight entertainment system and available on YouTube, gives an exciting behind-the-scenes look at how the wine lists are curated and Emirates’ relationship with some the world’s leading wineries. In several tutorials, Oliver Dixon, Emirates senior wine specialist, talks about the history behind some of the most exclusive wines on board and the extraordinary twist they give to every journey. Travelers can thus become wine connoisseurs just in time for their next trip or show off their new wine knowledge from the videos over dinner with the family.

The wines featured in the tutorials include:

Chateau Montrose 2005 is part of the Emirates Vintage Collection, a selection of rare wines that have matured in Emirates’ own cellars. Pressed from Cabernet Sauvignon, Merlot, Cabernet Franc and Petit Verdot grapes,  it is described as an “iron fist in a velvet glove” by Oliver Dixon due to its’ great power and almost steely edge on entry, leading to a smooth, velvety finish. The best way to enjoy this type of wine is by pouring it into a decanter, let it breathe for a little while and pair it with red meat dishes or a mature cheese which is not too salty. See the full video here.

Another wine from the Emirates Vintage Collection, the essence of this wine springs from the vineyard itself. The deep gravel soils in Pauillac are highly suitable to the cultivation of Cabernet Sauvignon, which is the major component of the blend and are responsible for the complexity and intensity of Mouton Rothschild. Described as “masculine and strong as well as a brilliant harmony of fruits and tannins” and praised for its long finish by Emirates’ wine expert, it is no wonder that this wine is sought by collectors from all over the world. See the full video here.

Just outside of Santiago de Chile in the foothills of the Andes Mountains lies the Concha y Toro family vineyard producing Don Melchor. Based on the Cabernet Sauvignon grape it is one of the most iconic red wines of Chile. “The altitude of the vineyard at 650 meters requires a different production process from that of red wines, for example from Bordeaux, where they are cultivated only at an altitude between 30 and 100 meters”, explains Oliver Dixon. The Chilean wine scores with a big but not over the top structure and its’ purity of fruit and can be combined easily with roasted chicken or red meat. See the full video here.

Produced by the famous wine making family Antinori, Tignanello was the first red wine from the region of Chianti to be blended with non-traditional varieties and the first to step outside regulations based on generations of tradition. Oliver Dixon recommends to wait until this vintage is at least eight years old before it approaches its optimum potential and one can detect aromas of cherry and crushed rocks, leading to an expressive palate of red and black fruits. Just like on an Emirates flight, the wine should be served with chicken, red meat or pasta dishes. See the full video here.

The cool clay soils of Bordeaux’s Saint Estèphe in France cool the vines and give Cos d’ Estournel its’ broad shouldered, full bodied style.. As with many of the exclusive wines on board of Emirates it is best to enjoy after having let it breathe for a while in a decanter, so it can develop all its’ flavours of blackcurrant fruit, mint and liquorice. Just as fascinating as the taste of this wine is the history of the Château behind it. The owner Louis Gaspard d’Estournel designed it himself in 1810 and as he was a big fan of India, he tried to recreate it in the style of an Indian Pagoda. See the full video here.

Probably the most famous wine from Bordeaux, Château Margaux was one of only four wines to achieve Premier Cru status during the classification of the Médoc in 1855. “Due to the topography of the vineyard with gravel deposits brought down from the Pyrenees by the Garonne river the terroir is particularly suited to Cabernet Sauvignon, however, the wine is softer, silkier and more feminine compared to wines from Pauillac”, explains Emirates wine expert Oliver Dixon. After a few difficult years of production in the 1970’s, a Greek family bought the Château, which is a near Palladian-style villa, and turned the fortunes of the vineyard around with a string of successful vintages in the 1980s. See the full video here.

Deep in the suburbs of the city of Bordeaux, surrounded by houses, lies the famous vineyard of La Mission Haut-Brion. Vines have been growing here since the Roman times and the estate of La Mission dates back around 550 years. The area has a similar soil structure to its neighbor Haut-Brion, which gives the wine a note of smokiness typical for the Pessac-Léognan region. The extremely seductive but focused wine blended from Cabernet Sauvignon, Merlot and Carbernet Franc, can be enjoyed best with beef, lamb or roasted chicken. See the full video here.

Château Haut-Brion is one of the most praised vineyards in all of France. Ahead of the International Exhibition of Paris in 1855 the wine, which until today always contains a high proportion of Merlot, was classified as a Premier Cru. The vineyards of the Château, which became one of the first famous wine properties of France to be foreign owned when purchased by New York financier Clarence Dillon, are elevated up to 27 meters above the Bordeaux norm. Due to this height some parcels have a high clay content which may be the reason for the smoky nose with tobacco notes and the overall velvety quality of the tannins. See the full video here.

Once again, the well-known Antinori-family is responsible for the extraordinary wine Cervaro della Sala, which the famous wine makers first marketed in 1987. Combining the internationally planted Chardonnay variety and the Italian-local variety Grechetto, the Cervaro della Sala is one of the leading white wines from Italy, more precisely the region of Umbria. According to Emirates’ wine expert Oliver Dixon the wine has enough character to pair with red meat, as well as the more conventional pairings and one can taste “fresh stone fruits like peaches and nectarine with the oak in the background” in the 2015. See the full video here.

Located only 80 kilometers south of Florence, the Casanova di Neri estate, where this Brunello di Montalcino is produced is home to 63 hectares of vineyards. Due to the warm and dry climate in this southern part of Tuscany, Brunello di Montalcino is a powerful wine with a typical big structure, however Tenuta Nuova is made in a more accessible style than many. Brunello is one of Italy’s most famous red wines and is named after a particular clone of the Sangiovese grape that was developed in the region. It is good to age for 30 years and more. The 2011 vintage of Tenuta Nuova has a nose of cherry and dark fruits as well as leather and spices in the background. “It is a sensational wine and its finish easily stays with you for a minute and a half”, enthuses Emirates wine expert Oliver Dixon. See the full video here.

About the Emirates wine programme

The Emirates wine strategy is to buy exceptional wines at the earliest opportunity and let them mature to allow them to express their full potential before serving them on board its aircraft. Emirates’ wine cellar, located in France, is the largest of any airline and currently holds 7.4 million bottles of fine wine, some of which will not be ready for serving on board until 2037. In 2018, the airline introduced the Emirates Vintage Collection, a selection of fine wines that have been stored in the airline’s cellar for up to 15 years.