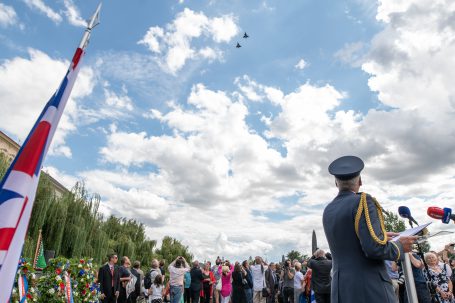 As part of the Czech Air Force’s events to mark the 100-year anniversary of the founding of the Czechoslovak Air Force, a ceremony was held at the Winged Lion Memorial on Prague’s Klarov today.

The wreath-laying ceremony at the statue, which honours the memory of the 2,507 Czechoslovak men and women who served in the British Royal Air Force during World War II, was attended by veterans and dignitaries, including Chairman of the NATO Military Committee Air Chief Marshal Sir Stuart Peach GBE KCB DL, serving Czech Air Force personnel including the Honour Guard and Sixtet of the Central Band of the Czech Armed Forces, and members of the RAF including Air Vice-Marshal David Cooper CBE.

The date of 14th August is of special significance to the veterans, since it was on that day in 1945 that the majority of them returned to Czechoslovakia. Initially, they were welcomed home as heroes. But tragically, after the communist coup in 1948, they were regarded as a threat to the new regime and persecuted, imprisoned or forced into jobs of hard physical labour.

As a part of the ceremony, Major General Boček, who this year celebrated his 95th birthday and is the last living Czech pilot to have served with Britain’s RAF during WWII, presented a model replica of the Spitfire with the markings of the Czechoslovak-manned 310 Squadron of the Royal Air Force to the most promising young Czech Air Force Cadet, Lieutenant Ondřej Mach, the pilot of 212th tactical squadron of Čáslav Air Base.

After the ceremony at the Winged Lion there was a flypast of two JAS-39 Gripens, followed by a reception at the Senate of the Czech Republic.

“Contemporary Czech Air Force pilots are following on the wings of the WWII fighters who served in the Royal Air Force. My goal is to uphold the reputation that the veterans have regained in the eyes of our citizens as well as our allies since November 1989. I am convinced that the Air Force will proudly keep this link and continue their legacy with pride,” said Defence Minister Lubomír Metnar.

“It is an honour to represent the Royal Air Force on the occasion of this ceremony to celebrate the centenary of the Czechoslovak Air Force. The ties between the two air forces is exemplified by the brave Czech and Slovak airmen who served with such distinction during WWII and their service is symbolized by the Winged Lion Memorial,” Air Vice-Marshal Cooper said.

“I was present at the unveiling of the Winged Lion in 2014 and I am delighted to see that the individual names of the 2,507 brave airmen have now been added to the memorial. As both the RAF and Czechoslovak Air Force are celebrating their centenaries in 2018, it is important to recognise the deep ties that have developed between the two forces over the decades,” Chairman of the NATO Military Committee Air Chief Marshal Sir Stuart Peach said.